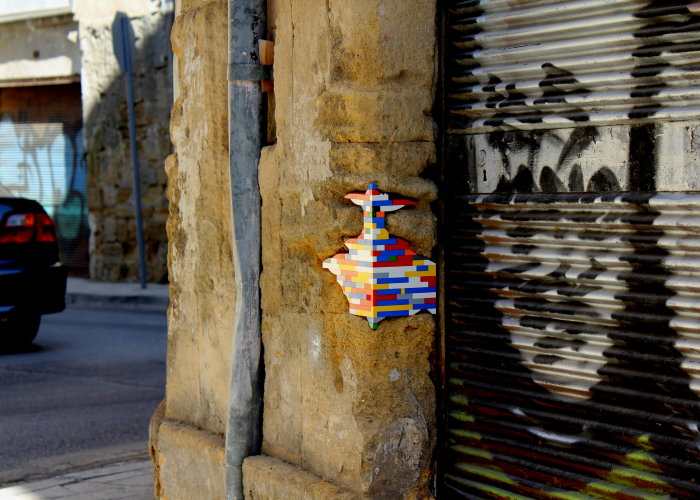 a project by Jan Vormann

Most of Jan Vormann’s works share one special feature: they have a surreal character; each of them questions the limits of the possible. He finds artistic motivation for many of his pieces by observing and researching a new experience and by seeking answers to questions related to the imaginary capacity of objects.

Dispatchwork is an on-going project that started in 2006, and was created under this paradigm. As the title suggests, it is about patching the holes of city walls with colourful Lego bricks or other small plastic construction pieces. The basic idea consists of regular elements that are taken out of context, redefined and transformed into a new oneiric and playful world.
In his work, Vormann deals with everyday issues, offering an ironic and complex perspective of the reality that surrounds us. Dispatchwork seeks to solve concrete matters concerning today’s society, such as the way we approach public spaces. Important issues that Dispatchwork considers consciously and critically include a major-scale inclusion of people who interact with Vormann’s work and the idea of going away from the white cube towards the people. The appropriation of common elements like Lego (or other small plastic construction pieces) is a feature that makes the global culture visible.
So far, the interventions have taken place in different public spaces, on walls and streets, in almost one hundred cities from all over the world. One of the central aspects of the project is to transform structural accidents of public spaces, highlighting them by turning them into colour, shapes and visual illusion. Through the transformation of regular bricks into plastic construction toys and by converting the rigidity of the cement structure into the lightness of a transitory building, the artist creates a new city landscape and evidences the creative possibility of intervening in the design of our own realities.
The role of the spectator is a very important feature of this project, not only because they can actually help the artist with the patching process, but also because one of Dispatchwork’s main goal is to surprise the bystander by bringing about the unexpected. In order to achieve an empathic relationship with the spectator, the artist creates a dialogue strategy that consists in showing an image that fascinates by its surreal character. This magical scene is the bridge between the viewer and the artists’ position facing a real context.
This is an ephemeral project, noticing the transitory aspects of matter itself: Vormann highlights the urban vulnerability or the destruction of the city through its temporary repair. The coloured plastic construction pieces of Dispatchwork appear along the cities anonymously and ephemerally, like an act of magic. In this way, he proposes another kind of transcendence for public spaces, turning them into an instance of urban, historical and artistic discussion.

Jan Vormann (1983) lives and works in Berlin. He quickly earned a reputation in the art world for his kinetic sculptures and installations, and in recent years, particularly with his project Dispatchwork, an intervention in the public space, with which he in a witty way repairs, patches and builds in holes with a material of popular culture – the well known Lego plastic construction pieces. It is not superfluous information that Vormann studied monumental art and restoration. For three years, he has been travelling the world with an extremely successful project and has repaired old buildings and monuments, including the Great Wall of China and buildings in Venice. He has exhibited worldwide in the last six years, in galleries in Paris, Berlin, Barcelona, Linz, Taipei, Atlanta, New York, St. Petersburg, Belgrade, Tel Aviv, Moscow, Rome, Tehran, Amsterdam and elsewhere. Vormann is a resident of the TRIBE international residency project at Sonica Festival and currently participates in the final exhibition of the TRIBE project at MoTA Point.