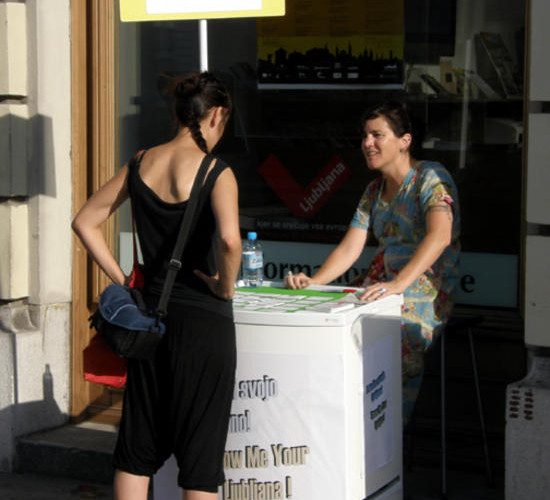 LEXA WALSH: SHOW ME YOUR LJUBLJANA!

A series of street interventions and an alternative map of Ljubljana

Show me your Ljubljana

Lexa Walsh took part of “Ljubljana from the outside” series. Her project was a new form of Tourism Bureau, a week-long performance piece in front of Tourist information center, collecting and disseminating information about Ljubljana: photo and video documentation of performative works, souvenir objects and new monuments , Regional Guidebook based on her research, a Community Bulletin Board (installed in a public space to be utilised by all visitors).

The project resulted in a map “Show me Your Ljubljana”, an endeavour to seek out a collective consciousness about ‘Sense of Place’, through nostalgia, invention, interaction and song. She collected 30 maps and 50 destinations, she made daily journeys, following every route on every map. Some maps had only a few red dots. Others were intricate treasure hunts.

Lexa Walsh was born near Philadelphia, PA, USA as the youngest of 15 children. She has lived, worked, shown and toured in the San Francisco Bay Area, Europe, and Asia. She has done artist residencies throughout Taiwan and Europe, including REX Cultural Center in Belgrade, Serbia. Walsh received a grant from the Gunk Foundation in 2004 for The Immortalization Project and the Artslink project grant for her work in Ljubljana. Her work is supplemented and informed by her travels, community work and experimental music projects. She is a contributing editor of the Oakland arts magazine Swee(t)art, teaches a Public Art workshop for youth, currently curates an Oakland, California project space, while continuing to play a role at the Czech art center CESTA where she lived and worked for 8 years. She is a founding member of the all women, all toy instrument Toychestra, and the Czech-based all women a cappella group Kačkala, both with whom she tours internationally.