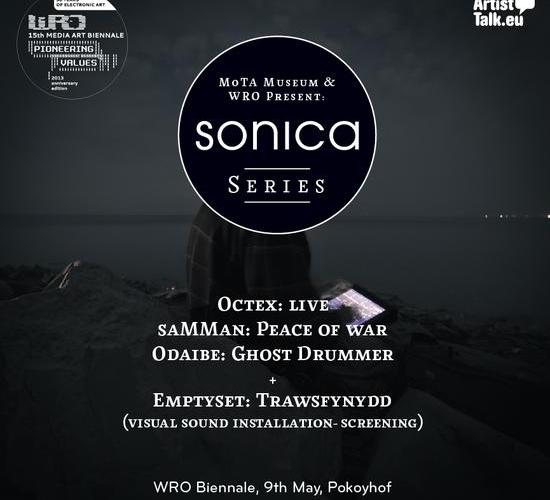 SONICA Series @ WRO Biennale 2013 is an Audiovisual and Sound event celebrating the closing of the ArtistTalk.eu project.

OCTEX (SLO)
Jernej Marušič aka Octex is one of most profiled and internationally established Slovenian electronic artists, operating somewhere in between club and avant-garde, exploring the boundaries of dub aesthetics and sub bass frequencies. Besides that he has released music on numerous labels (Mute, EFA, Entropy, Public Records…) and remixed artists such as Laibach, Marko Furstenberg, Gabriel Le Mar, Ulltra Red. He has been performing his audio/visual live set at festivals and clubs all around Europe, such as ARS Electronica (Linz), Club Transmediale (Berlin), ISEA (Helsinki), Dis-patch (Belgrade) Exit (Novi Sad) White Night (Riga), Flussi (Avellino)…

EMPTYSET (UK): Trawsfynydd
Emptyset’s (James Ginzburg and Paul Purgas) Trawsfynydd is a film installation of sound and video recorded in decommissioned nuclear power station Trawsfynydd in Snowdonia, using the resonances of the building’s interiors. Emptyset premiered the film at Tate Modern in Late at Tate Britain: Performing Architecture. The work is constructed from spatial recordings and video captured inside the vast Modernist interior examining a moment in time within the life of this landmark structure, considering both its industrial legacy and transitional future.

ODAIBE (PL)- Bartek Szlachcic + Ela Leszczyńska + Karol Jaśkowiak: Ghost Drummer
Bartek Szlachcic is a graphic designer, musician and new media artist He create sounds & space under name Odaibe. Ghost Drummer is a multidisciplinary project that explores graphic qualities in process of playing on a drum kit. Besides being a musician, drummer when playing is unconsciously engaged in an elaborate choreography. The drum sticks are the extensions of drummer’s hands like a brush is an extension of the painter’s hand. Motion-captured movements become a visual map over a time revealing fragile rhythm structures and invisible notations behind energetic instrumental solo.
About SONICA Series
SONICA Series is an offshoot of SONICA Festival- the leading manifestation of transitory art in Slovenia that focuses on intermedia art, exhibitions, public interventions, visual & audiovisual art and performances, sound art, experimental & electronic music, research. Our focus lies primarly in the medium of sound as transitory medium between various intermediate spaces of art, between galleries, museums, club venues, concert halls and public spaces, between ‘serious’ art and pop culture, between music and visual culture, between object and sound, between art and technology.