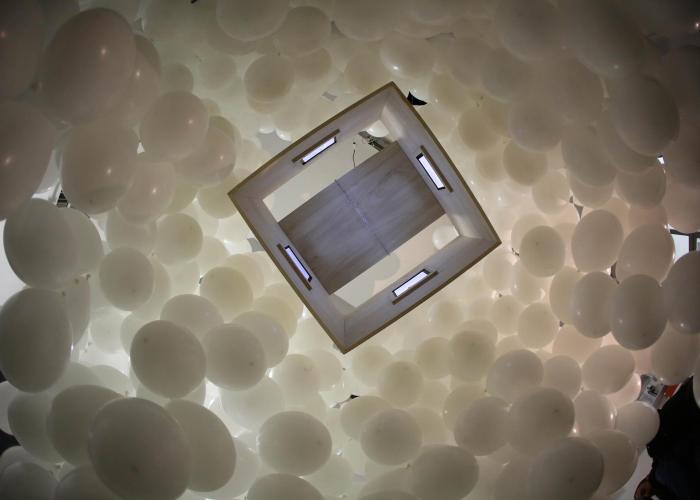 22. Januar – 10. februar 2015
MoTA Point, Gosposvetska cesta 12, Ljubljana
”Reality; lost and found” is an intermedia project, which creatively concentrates on finding spatial representations of the inner state of an individual with mental disorders, and representing them to the general public through video, installation, sound and performance. The exhibition setup comes from discussions about sound, visual and other hallucinations with patients suffering from paranoid schizophrenia. The artists are researching ways to destroy prejudice against individuals with mental disorders and to bring their issues closer to the general public.

The purpose of the main installation is to induce similar feelings that patients suffering from mental disorders often experience. The four presented videos describe individual impressions of patients thought-processes. The base of the second installation are audio and visual hallucinations of a few patients that closely connect with Ickes conspiracy theories. The exhibition opposes real and fictive elements. The installation is about the inability to comprehend the disorders and eventual fear and discrimination of suffering individuals. This project attempts to reduce prejudices by bringing these issues to the general public while also trying to awaken the problems of anxiety, shame, and fear of discrimination that can come from not understanding and not knowing the nature of mental disorders.

Olja Grubić is a Croatian artist, (born 1990 in Pula, Croatia) based in Ljubljana, Slovenia, where she graduated from the Conceptualisation of Space program at the Academy of Visual Arts (ava.si). Her works cover a wide range of media including drawing, photography, video, installation and performance, which have been exhibited in shows in Slovenia and Croatia. She investigates socio-political themes and links them to her position in both Slovenia and Croatia.

Yuliya Molina, (born 1983 in Mariupol, Ukraine) is a multimedia artist of the younger generation, who grew up in several locations (USSR-Vietnam-Ukraine-Slovenia). In 2007, she entered the Academy of Fine Arts and Design, majoring in sculpture. From 2011 to 2012 she continued her studies at Facultade de Belas Artes da Universidade do Porto in Portugal. She utilizes photography, video, sound, and motions of her body. Her installations combine wood, plaster, glass, paper, cloth, light and wide variety of other materials.

Borut Bučinel (born in Šempeter) is a self-employed light designer, dancer, and choreographer. As an author he created a lot of theater plays. He was first introduced to theater in ”Dijaški dom Ivana Cankarja” where he met Sebastjan Starič (with whom he is currently working on a new play) and in theater ”Glej” where he started working as a technician and a light designer. As an technician he participated in several festivals such as
Svetlobna gverila, Ana Desetnica, Exodos, and Fronta. Currently, he has been concentrating more on film and photography.

Vedran Grubić (born 1992 in Pula, Croatia) is a professional musician. He co-founded the band ”NLV” (Nikol, Luka i Vedran) which released their debut EP, and who are you?. As a freelance musician he has worked with a lot of renowned musicians such as Dušan Kranjc (2cellos), Marijan Jelenić (NOLA), Isabel (Rundek cargo trio orkestar), Goran Farkaš (VEJA), Sandro Peročević, and more. Besides playing music, Vedran is also skilled in wood working, and as a guitar luthier.