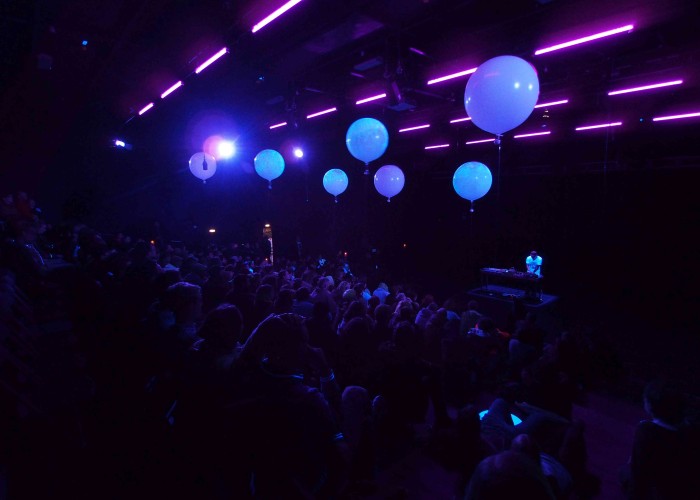 One of the most prominent members of Berlin’s scene of experimental music will take us to two different spaces of deconstructed club music and sublime electro-acoustic sound spatial experiences.

RX-11 SPACE DRUM MACHINE is a composition using sine wave generators and drum machines that feed into a PA system as well as into a swarm of balloons carrying bluetooth-enabled speakers. By distributing the various output channels of his instruments throughout the spatialized speaker array via time delays in the signal paths as well as through the specificity conferred by the buildingʼs resonant properties and the random variations generated by chance movement of the balloons in the air, Capece engulfs the listener into a complex landscape of overtones and constantly swirling beats. The disorienting and engrossing spatial ecosystem takes on an uncontrollable sonic life of its own, destroying any sense of a precise focal point. The project was premiered on this year’s edition of CTM Festival in Berlin.

EPOCHÉ is an electro-acoustic composition for analog synth, oscillator, feedback and suspended speakers. The work creates a subtle space filled with shifting frequencies that float in space throught suspended speakers mounted on the balloons. In this work Capece uses the phenomenological idea of epoché, a process of bracketing and phenomenological reduction. Bracketing is a term in the philosophical school of phenomenology describing the act of suspending judgment about the natural world to instead focus on analysis of mental experience. 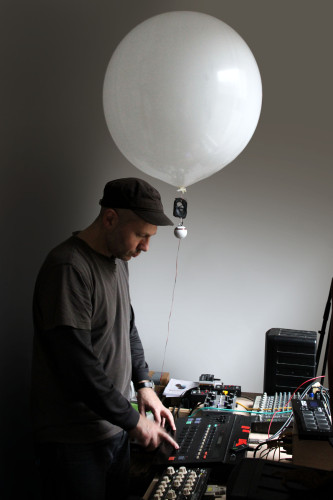 LUCIO CAPECE (arg)
Lucio Capece is a musician born in Argentina that lives in Berlin. His studies started as a classical guitar player getting his certificate at the public Conservatory in Argentina (10 years studies). As a saxophone and bass clarinet player he studied in Argentina and then he continued studying in France with Louis Sclavis. He plays mainly in improvised music projects that go from extreme reductionism to noise, not considering the amount of sound or silence as a main thing but the time experience and the perception experience as main subjects. He finds in this sense a strong inspiration in cinema, contemporary art, sound art and electronic music.

His sound language consists of a survey of sound of bass clarinet and alto saxophone over extended playing techniques and the use of analog synthesizers, noise generators, drum machine, shrutti, box, sinewaves, helium balloons, various speakers and mechanical sounds. Since 2000 he plays mainly improvised music and composed music with the Q-O2 nad contemporary classical music with Konzert Minimal (projects with Phill Niblock, Pauline Oliveros, Christian Wolff, John Cage, Peter Ablinger, Keith Rowe, Stevie Wishart, etc).  As an improviser he shares projects with Axel Dörner, Toshimaru Nakamura, Mattin, Radu Malfatti, Annette Krebs, Rhodri Davies and many others. In recent years, Capece, in addition to collaborations with well-known electronic musicians such as Vladislav Delay, Kevin Drumm and Mika Vainio (Pan Sonic ) deals with the design of a half concerts and half installations and creates psycho- socio- spatial audio experience. Capece has performed all over the world , his discography was released on famous labels such as Editions Mego, PAN, Honest Jon’s, Mode Records, Another Timbre and others.