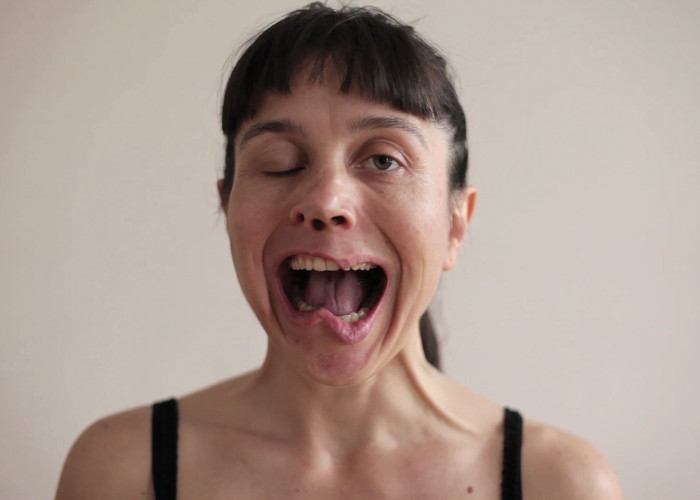 Irena Tomažin’s project »faces of voices« is a continuation of her research in the field of voice and was inspired by the question »what would a portrait of a certain voice look like?« Voice is movement. It shapes, moves, dislocates, touches the body. In her previous works, the body was her main medium, while in »faces of voices« play between the static portraits and movement of voice organically lead to use of video.

The recorded faces in this installation are shaped and contoured by voice. They are a visual mirror of voices that fill our minds, whisper or scream at us, but sometimes they sound like they don’t belong to any face or vice- versa. And then sometimes a face is just what remains of a sound expression. Voices bring us faces of sighs, murmurs, sucking, jibbering, being quiet, bubbling, demanding, resonating. They ae spaces of our inner selves leaking into the outside world. We are naked in voice.

“Voice draws out a new face for me, sculpts a new body.”

Irena Tomažin (1979) was born in Ljubljana, Slovenia. She graduated at the University of Ljubljana – Department of Philosophy. She was actively involved in the art of dance and theater since secondary school when she was a member of the theater group IHT. Further dance-theatre and voice education she gathered in programs such as EN-KNAP Laboratory; the educational program Agon of EMANAT; the Performing Arts seminars of Maska Ljubljana, as well as in many workshops and seminars in Slovenia and abroad. In 2004 she received the danceWEB Scholarship for Contemporary Dance (ImPulzTanz Festival Vienna, AT) and was selected in 2007 in Atelier program at the Grotowski Institute (Wroclaw, PL).  In 2001 she made her dance debut Hitchcock’s Metamorphoses together with conductor Mitja Reichenberg and in 2005 her second solo Caprice, which focused on the voice. After this solo she started to work more intensively on the voice. In 2006 she made a re-work of Caprice for City of Women Festival (Ljubljana, SI), entitled Caprice (re)lapsed. For both pieces she was bestowed with the Liberal Academy’s Golden Bird Award. Soon after followed the projects  As a Rain Drop into the Mouth of Silence (2008), for which she received an award at the Gibanica Festival in 2009, and Out of Discord in collaboration with Josephine Evrard. In 2012 she produced her fourth solo The Taste of Silence Always Resonates.  Mathieu Copeland invited her in 2011 to work with him on the project  Une exposition à être lue in Geneva (HEAD), where she collaborated on curating the exhibition, holding lessons for partners and working on project’s book, in which her composition for voice and body were published. In 2013 they continued to collaborate on the project  Chorégraphier l’exposition, (Ferme du Buisson, Paris), where she again contributed her composition and the text Voice’s Empty Spaces.

Since 2006 she runs her solo project for voice and dictaphones iT, with which she holds guest appearances in Slovenia and abroad. In 2011 she produced an album Crying Games, produced by Atol Institute, together with Aldo Ivančić with whom she worked in BAST collective and on album Retinal Circus. In the framework of international project Co-voicings (2013-14) they published the second album The Taste of Silence, with music from her performance The Taste of Silence Always Resonates.

She is collaborating and performing in the band Borghesia.