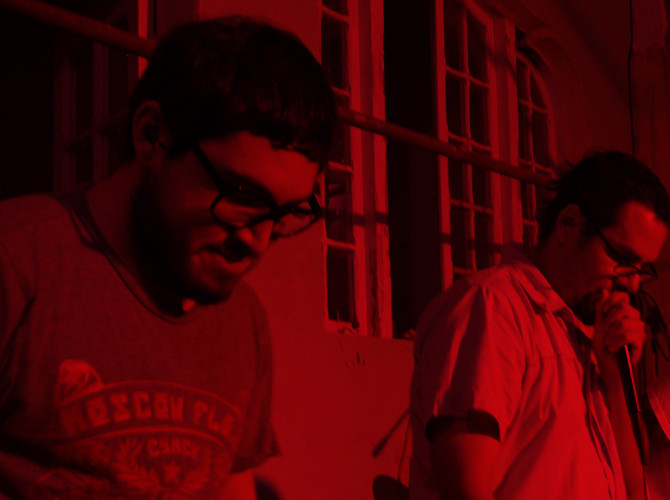 An event of electroacoustic music by two artists of contemporary Mexican music. The duo will confront you with a highly intense sound reality.

Rogelio Sosa (Mexico City, 1977) is an experimental musician, composer and sound artist. He is also a very active curator of experimental music in Mexico. Using a wide range of electronic tools, his work includes live performances, compositions and installations that develops in the fields of free improvisation, noise, electroacoustic music and sound art. Currently he is the artistic director of the Aural Festival and music director of the nobel Germinal Festival. (space) His music has been released by labels such as Sub Rosa, Important and Mode Records and lately by Bocian. He has presented his work in more than 40 cities around the world, from Mexico and South America to the United States and Europe.

Mexican Composer, sound artist and cultural promoter resident in Ljubljana, Slovenia. He focuses on different artistic areas with a special emphasis in acoustic, electroacoustic and experimental music. His catalog includes works for solo instrument, ensemble, mixed media, guided improvisation, installation, performance, film and various performing arts, His works had been presented in 18 countries within the official program of different festivals, conferences and symposia about music and sound art. He was a fellow composer at FONCA in Mexico for 4 times in 2000, 2002, 2004 and 2010. PHONOS resident composer of the foundation at the University Pompeu Fabra in Barcelona, Spain between 2004 and 2006 where he composed several interactive pieces and collaborate at the master of digital arts and digital composition. Recently he joined to Drustvo Kulturno Rok at Ljubljana, this association aims tocreate new systems of sound organization and composition, based on DNA analysis. He also promotes a research center for interdisciplinary art technologies CIIDAT.org. in Mexico City.