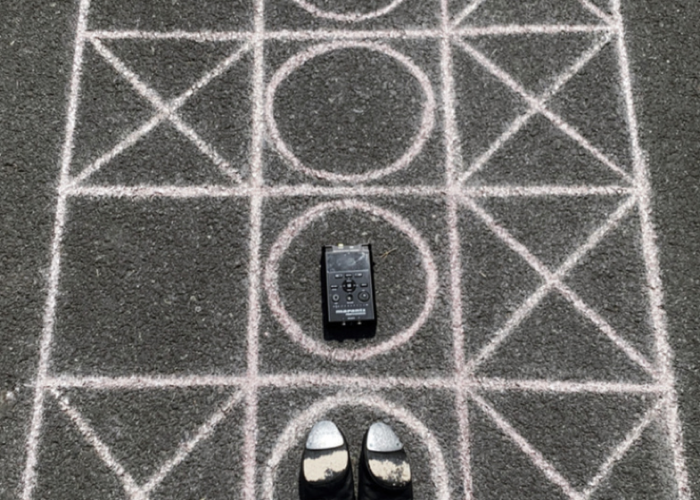 Pixxelpoint is a festival of contemporary artistic practices. The festival seeks synergies but also contrasts between media-art scenes and the names of the wider region. It looks to some of the most contemporary creative practices in the world and seeks their reflection, including in the triangle between art, science and technology. The festival presents a gallery exhibition of multimedia installations, video and art works, as well as performances and other interventions in specific locations. Martin Bricelj Baraga with his light kinetic installation Lumitronomi and Simina Oprescu with her video performance Ludus were guest artists at the festival.

Lumitronom is part of the Metronomi series, with which Martin Bricelj Baraga develops modular installations for public space, working according to the principle of perpetual motion and energy transformation. In combinations with natural elements such as light, air and water, he tests the possibilities of infinite movement in repetitive patterns. Inspired by the repetitive nature of the metronome, the experimental works evoke natural forces as a source of energy that can be transformed into different forms with modern technology. The meditative kinetic installation Lumitronom harnesses the sun’s energy as a primary energy source and transforms it into a moving body of light. Created in collaboration with the Paris-based architectural collective Bellastock, Lumitronom is built from discarded materials and is thus an example of their reuse. The result is a poetic, ambient installation that evokes a flock of birds or the rustling of leaves and captivates the viewer with its unique rhythmic sequences.

Ludus is an attempt to use play as a way of exploring how form can change sound and dictate rhythm. Here, rules that otherwise only dictate the play create a random and unpredictable movement of sound in space. The beauty of the game is precisely in its contradictions: the rules outline the form and the mystery weaves its core. The game is like the mystery of those who play; within it, the laws and customs of the ordinary world do not apply. “Archaic man knew that music is a game – a secret force capable of awakening our emotions. Only much later did it become an important part of life, reflected, in short, by art in our sense of the word.” (Johan Huizinga – Homo Ludens)

Simina Oprescu is a composer, video and intermedia artist from Bucharest. Her personal interests and the intertwining of her two educational backgrounds (Department of Photography and Dynamic Media at the National University of Arts in Bucharest, Romania, and Department of Acousmatic Composition at the Royal Conservatory of Mons, Belgium) are strongly visible in her sound and composition, but it is built around visually oriented concepts. By questioning the use of background depth as a means to transform our own perception of environment and movement, and by exploring sound as a means of expression in visual and non-visual space, Simina Oprescu analyses the mutual empowerment of still and moving images.