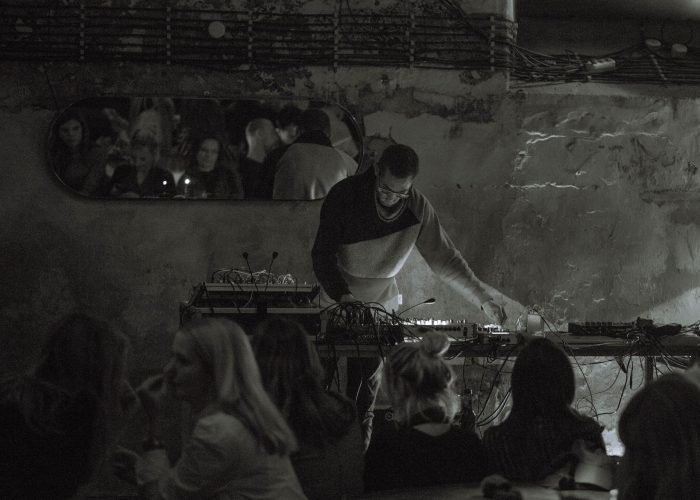 SONICA is going to Dim Belgrade, sister of a cult Drugstore club with a fine selection of its artist’s friends. Domen Učakar, whose musical career appears certainly comfortable in being fed by the multiplicity of inputs belonging to the experimentation of different music genres, will create a specific set for Dim, trying to calm his endless evolving industrial beats into an ambient set, while Zergon, DJ, producer and sound artist from Ljubljana, a member of Synaptic Crew, who also works in the field of audiovisual performances and in the vast field of DIY electronics will flush us with the newly prepared modular synth set – sharp as a scalpel blade. Tuum, Brandon Rosenbluth, half of the shamanic electronics duo Shaddah Tuum and co-founder of the Berlin-based avant label collective Portals Editions, known for his eclectic mystic rhythms will continue the night into smokey grooves.

Aleš Hieng – Zergon (1984) is a DJ, music producer and sound artist from Ljubljana. He is a member of the Synaptic Crew, and, among other things, works in the field of audio-visual performance and in the wide field of DIY electronics. He is interested in club music as well as in sound research and audio-visual experimentation. His sound ranges from deep-house and techno to IDM, experimental electronics, noise and abstract drone. His musical performances are based on improvisation – live programming of rhythmic patterns, melodic sequences, sound design, playing effects, and mixing everything with field recordings. His tracks can be found on numerous Chilli Space compilations, Kamizdat compilations and more recently on his Bandcamp page as well.

He collaborated with the artist Robertina Šebjanič on the audio-visual project echo 10-9. He is the co-author of the ongoing sound-chemical installation Time Displacement – Chemobrionic Garden in collaboration with Robertina Šebjanič and Ida Hiršenfelder, which was exhibited in 2016 at the Ars Electronica festival in Linz, as part of the exhibition Radical Atoms. He is also the co-author of the sound installation Sound Disposition – Crystal Gardens with the mentioned artists.

LIFECUTTER is an electronic / techno / experimental live act with dark ambient vibe. LIFECUTTER likes synths, effect pedals, distortion, different types of heavy music and makes music because he has to. LIFECUTTER is a moniker name for Domen Ucakar. The man behind the electronic adventure in front of you is far from being a newcomer to musical explorations. He travelled that road playing a bass guitar with a number of local hardcore punk bands, indie rock derivatives found their footing in Icarus Down, while the songwriting production of electro-pop sensibilities was explored in the Neon Spektra project. Versatility here is apparent, as shown in his collaboration with a longtime friend Neven M. Agalma in the still very much kicking and screaming noise duo Ontervjabbit. It is the exploration of various strands of noise in the latter, combined with his devouring of the Warp Records sound in the 1990s, that is seemingly the most obvious influence him. LIFECUTTER’s music is a conscious effort to put aside and avoid the customary and well-established track structures, especially those usually used in songwriting. He uses different types of sound synthesis and an array of stomp boxes to make his music. He derives from a noise scene and takes that mentality into his electronic music to make his palette of dark atmospheric tension packed energy bomb that dilutes the border between analog and digital produced sounds and can find its place in clubs or festival grounds. It can pulsate, rhythmically break or it can take you on a filmic journey.

TUUM is Brandon Rosenbluth, half of the shamanic electronics duo Shaddah Tuum and co-founder of the Berlin-based avant label collective Portals Editions. TUUM DJ sets are a total immersion in alternate realities of sound, body and mind. Psychonauts welcome.