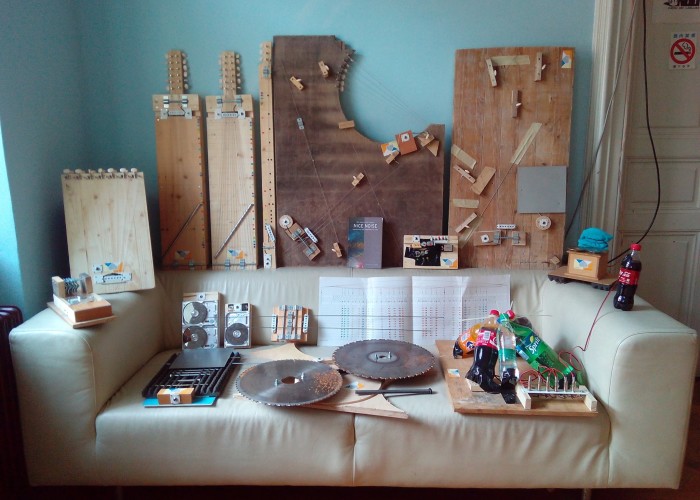 We’re announcing a last minute presentation / workshop by the last year’s Sonica and Ljudmila artist in residence Yuri Landman. During his resiadency, he not only led three workshops (we built Malevich’s strings, the Hacked Hard Disk Drive and electronic kalimbas), but also built a whole collection of custom instruments for MoTA’s impermanent collection.

We would also like to invite everyone that participated in the workshops last year to bring their instruments and join the orchestra.
If there’s enough of us, the lecture / workshop will be followed by Yuri’s live act.

During the workshop, you will also be able to see everything that you missed at the Sonic Pavillion exhibition on Friday.

Yuri Landman is an experimental instrument builder and musician. After a career as a comic book artist as well as a musician in the bands Zoppo and Avec-A, Yuri Landman began designing experimental musical instruments. Based on prepared guitar techniques, he built his first instrument in 2001 to solve the inaccuracy of instant preparations. In 2006 he got in contact with Liars. Developed over six years of prototyping, he fully realised the Moodswinger for them with commissions from numerous other musicians to follow. Yuri has custom built derivatives for such musical luminaries as Sonic Youth, Half Japanese, Enon, Lou Barlow, dEUS, The Dodos, Blood Red Shoes, Liars, HEALTH, Liam Finn, The Luyas, The Veils, MeltBanana, Micachu & The Shapes, The Go! Team, These Are Powers, Kate Nash, Women, Action Beat, Peter James Taylor, Rhys Chatham, Dustin Wong, Philippe Petit and others. Around 2008 he started giving lectures and presentations with his instruments, leading to a request in 2009 for a practical building workshop. This became the rise of the Home Swinger project. A Gesamtkunstwerk consisting of a DIY-workshop where people build their own electric instrument and often followed by an afternoon rehearsal on the second day and a 40 minute ensemble performance with multiple Home Swingers, drums, basses, and guitars in the tradition of the Rhys Chatham and Glenn Branca compositions. The Moodswinger as well as the Home Swinger are included in the permanent collection of the Musical Instrument Museum in Phoenix, AZ. The SONS Museum in Belgium owns another instrument of Landman.

This Digital Dish is part of Sonica Festival. The Educational and Art Programme of Društvo Ljudmila, Art and Science Laboratory is supported by Ministry of Culture (in coproduction with Projekt Atol Institute) and City Municipality of Ljubljana – Department for Culture.