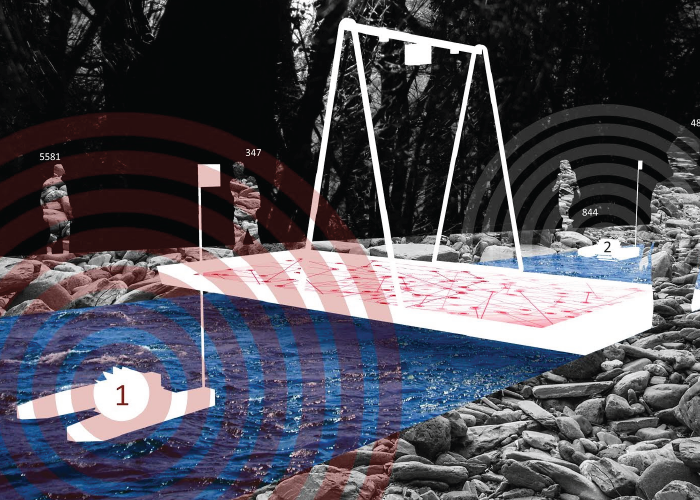 ‘When we first arrived to Almaty, the first thing I noticed was a kind of capillar system- a
channel system of Aryks. These seem to be omnipresent in the city – transforming certain streets into peaceful walking paths (…). We later realised this kind of planning was due to the proximity of a glacier – Almaty is positioned below the high mountains – which in the past represented a great danger to the citizens of Almaty. Adding a river to this, you really feel the water stream present in this city – it is almost like blood that keeps the city going, with the glacier in the mountain, making it a distant and hidden heart of the city.’
Martin Bricelj Baraga, Curator.

Five new interactive artworks will transform the area of the Esentai river in Almaty into an open-air museum and invite local habitants to experience their river, channels (locally known as “aryks”), riverbanks and fountains like never before. From water and sun powered kinetic sculptures to an open air sound gallery and explorations of tech waste and water data visualisation, this selection brings together multimedia installations presented for the first time in Kazakhstan as part of the ninth edition of ArtBat Fest’s Public Art Project, taking place in Almaty on the theme of Water Stream.

MOTA – Museum of Transitory Art and Bellastock, an experimental architecture association based in Paris, have teamed up to commission and curate an experiential journey that reflect on the importance of water in the cities. Site specific public space artworks from Kazakh and international artists using water as a structural element have been selected by curators Martin Bricelj Baraga (MoTA) and Simon Jacquemin (Bellastock).

Bellastock and MoTA have commissioned two new artworks, ‘Aryk-o-phone’ – a river instrument played by the Esentai river itself, and ‘Lumitronome’ – a solar powered kinetic light installation that will illuminate the beautiful Nedelka fountain.